"The architectural and artistic value of the temple is immense. The temple can be saved and honoured as part of Greece's rich history if its importance is realized and respected by the government. Cultural pride and history must be preserved and valued. Only one third of the possible artifacts have been excavated from this site."
This article first intrigued my interest because it sparked my interest towards archaeological sites being destroyed by construction efforts. The site that this article and blog talks about is completely covered by vegetation and litter. This is completely against the archaeological ethic of preserving the past and it is actually quite shocking that a known archaeological site is still not being given the respect that it should have.
The archaeological site to which I am referring is the 6th century BC Temple of Aphrodite located in a part of the ancient area of Thessaloniki and now resting within the municipality of modern Thermaikos in the city Square of Antigoninon. The article from Popular Archaeology explains that the temple is a “Late Archaic period temple, 200 years older than the Parthenon, [which] was originally built to honour the Greek goddess of Aphrodite (Venus), the goddess of love, in the 6th century B.C.  It was later moved during Roman times to another location, which was considered a sacred area where there was a concentration of temples and shrines.” It is clear that this temple had extreme significance in ancient times as it was not destroyed, but moved to a place of extreme religious importance.
The remains of the temple are in no way preserved or presented properly to the public. The temple is currently sandwiched between modern buildings, hardly recognizable to anyone who walks by, and is tucked away behind metal construction fences. The temple is in danger in its position due to growing urban sprawl. It is fair to note that some of the temple’s objects and architecture features have been can be seen by visitors today preserved in the Archaeological Museum of Thessaloniki. Although some parts of the temple are being properly preserved, the majority of it still lies unprotected in a damaging area. The article states that “the temple is a symbol of national pride, thought of as not only a treasure of Greece but a priceless representation of global heritage.” Therefore, we have the ethical right to push to have it properly protected and preserved.
The Central Archaeological Council has not been able to expropriate the land which the temple sits on, as the owners are not interested in expropriation. This problem will ensure that new construction will hide the remains of the temple indefinitely. The issue of the Temple of Aphrodite represents an issue of urban development versus archaeological protection and preservation and therefore much be addressed effectively and in a timely manner.
Below I have posted some pictures of the site of the Temple of Aphrodite, and how it stands currently in its position within the city. It is shocking to see that the temple has become completely overgrown with vegetation and is covered with litter and refuse. This is NOT the way an important part of our history should be treated, especially since we are aware of its location and importance. 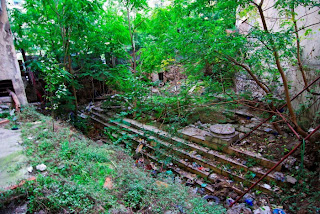 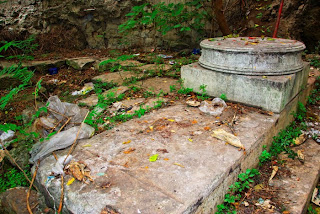 For more information about the Temple of Aphrodite and the issues surrounding it, please visit: http://templeofvenus.gr/en.
Posted by skilburn at 10:24